Discover in personalities and signs of the time of Murten battle on the walls of our hotel floors. The young local artist Sam Embleton designed them and describe them as follows:

MUSIC was as much part of everyday life as it is now, but it was all made by the people themselves. Many played instruments and most could sing. It was always so until radio, recordings and computers replaced many human creative skills. 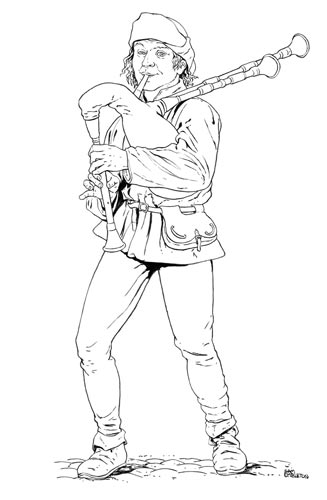 Drums, pipes, flutes and bagpipes provided music for pleasure, celebrations, dancing and for marching to war. In 1476 you would have heard the sound of fifes, drums and bagpipes in the taverns and in the streets, when the long columns of men marched off to battle.

All men owed their community military service. They were drilled and partly equipped and served together in military formations. This is the typical equipment of a Swiss soldier, helmet and breastplate and sometimes armour for the arms and legs. This man is armed with a typical crossbow, a very powerful weapon which could be shot three or four times a minute. He has also a short cutting sword and at his feet his share of the enormous booty captured from the Burgundians.

WOMEN played a very big part at all levels of everyday life. They raised their children, ran farms and homes, shops, estates, family businesses and castles, while their husbands worked, played at war and travelled, they even participated in the world of politics. 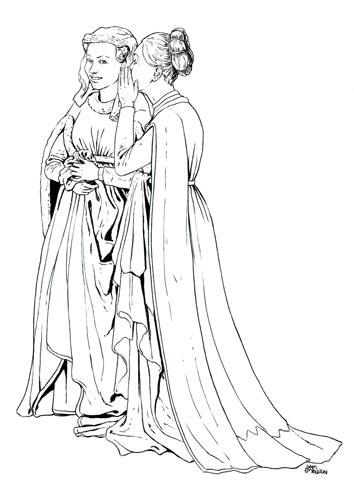 Women also owed service to their community. Some accompanied their soldier husbands on campaign and Swiss artists, covering the war like later war artists, drew them carrying water for the soldiers, working in camp and on the march, sometimes well armed. This lady was drawn fully equipped with a handgun, powder and ammunition serving as a memeber of a company of gunners. Her practical woolen clothes and linen headdress were worn by most women at work. On her headdress she wears the badge of Fribourg. 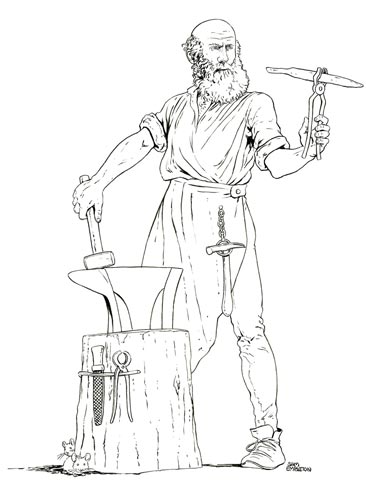 Almost every village had at least one who shoed the horses, kept tools and metalwork in good repair and wagons and carts running properly. They were the motor mechanics of their time. They could also keep armour and weapons in good condition. Full armours were not heavy and clumsy, they didn’t restrict movement and they weighed about the same as a modern soldier’s equipment. The armourers who made them were the most skilled metal workers in their world and their finished products were the equivalent of the Lamborghini or Rolls Royce of a modern millionaire. 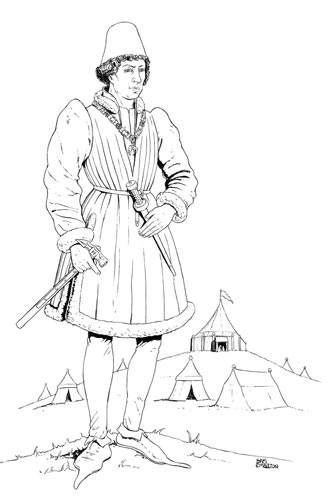 He was a young nobleman climbing in power and constantly fighting for his position, steadily increasing wealth and growing supporters around him, like the owner of one of today’s great international industrial companies.

Every leader and every community had special badges and symbols to identify themselves. These might be reduced to the colour of soldier’s clothing, badges based on the coats of arms of the leader that they served or full embroidered banners of rich materials decorating coats, tents and flags. 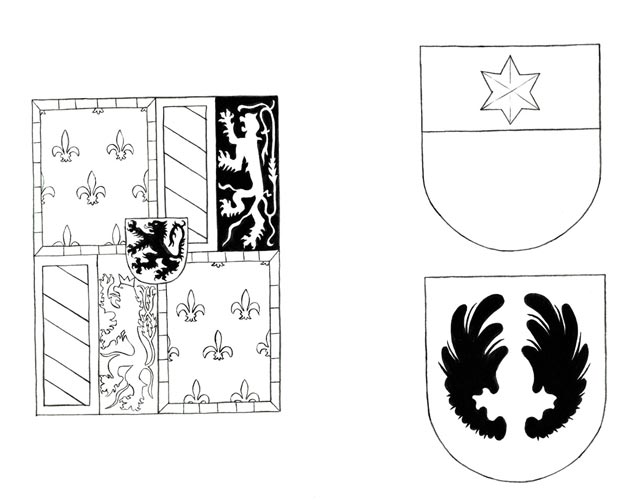 This is important for us

In the Hotel Murtenhof & Krone we aim to continually optimize our business, not only commercially but also for the benefit of our guests:
 We want our customers to feel the warmth and commitment of our team.
 We want our employees to be able to count on a sense of stability and continuity.
 We expect our suppliers to give us what we also offer them: flexibility. In return we offer them the opportunity to build a long-term working relationship with attractive sales potential.

These things are important to us:
 Independence
 Acknowledgement
 Quality control
 Openness
 Courage to make changes
 Friendliness
 Expertise
 Creativity
 Being different
 Prospects and new horizons
 History  especially 1476
 The price of oil (weve just installed a new heating system)
But most important to us are the people around us. We always try to improve for them. For example, we give our guests a small Christmas gift, we offer our staff special treats and we always greet our suppliers with a smile and a few kind words.